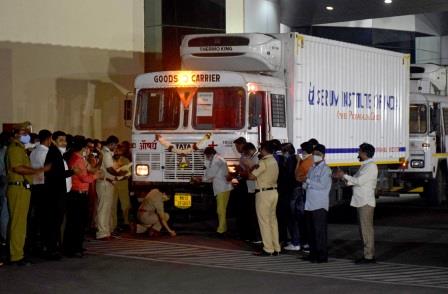 A police officer performs prayers in front of a truck carrying first consignment of COVISHIELD, a coronavirus disease vaccine developed by AstraZeneca and Oxford University, before it leaves from Serum Bio-Pharma Park of Serum Institute of India, for its distribution, in Pune, India, January 12, 2021. REUTERS/Kalpesh Nukte

NEW DELHI (INDIA) – As part of what is being called ‘World’s biggest inoculation drive’, Indian carrier Spicejet carried a large consignment of COVID-19 vaccines from the city of Pune to the capital New Delhi on Tuesday.

The private carrier will transport bulk vaccine consignments to several cities as state authorities prepare to launch the distribution process.

“Today marks the beginning of a long and decisive phase in India’s fight against the pandemic and SpiceJet is proud to assist in the biggest vaccination drive in the history of mankind,” the airline’s chairman and managing director, Ajay Singh, said.

Health officials in several states are preparing to receive their first consignments.

“These vaccines will be taken to the cold storage from the airport and swiftly delivered to vaccination booths,” said Nitin Patel, the deputy chief minister of Gujarat.

Over a week after approving the vaccine, COVshield, Modi’s government on Monday signed purchase agreements with the Pune-based vaccine manufacturer, Serum Institute of India.

Senior officials are discussing the terms of the deal with the Serum Institute, hoping to bring down prices below $3 per shot. The negotiations have delayed the roll-out of the immunization programme.