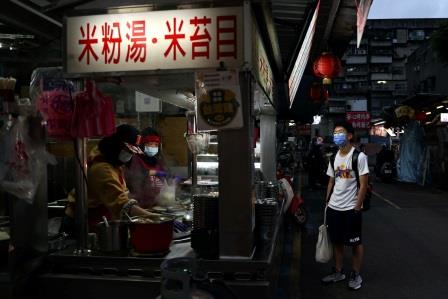 FILE PHOTO: A customer wearing a protective mask, amid the coronavirus disease (COVID-19) pandemic, waits for his order at a market in Taipei, Taiwan, January 6, 2021. REUTERS/Ann Wang

TAIPEI (TAIWAN) – Taiwan has logged in its first domestically transmitted cases of COVID-19 since Dec. 22 . Of the two cases, one is a doctor who was treating an infected patient the other case is a nurse who is the doctor’s girlfriend.

Though large number of infections were found in people coming to Taiwan from overseas, the island reported domestic transmission in December, the first set of cases after April 12.

Due to early preventive measures, Taiwan was able to keep the pandemic well under control. It has reported 839 cases, including seven deaths, with 101 in hospital being treated.

“Of course, we really regret the hospital infection,” Health Minister Chen Shih-chung told reporters. “Our hospital control measures are extremely strict, but inevitably something may have been overlooked.”

While the doctor had been treating a COVID-19 patient, his nurse girlfriend had not, Chen said.

A total of 464 contacts at the hospital have been screened with all returning negative tests, while another 42 people were in the process of being tested, he said.

All hospital workers will be tested again within three days, Chen added.