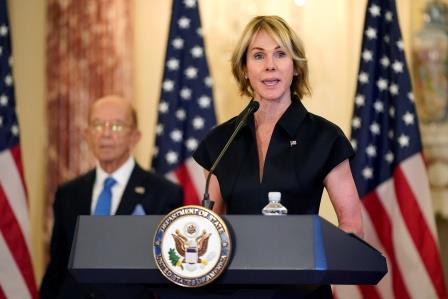 FILE PHOTO: U.S. Ambassador to the United Nations Kelly Craft speaks next to Commerce Secretary Wilbur Ross, during a news conference to announce the Trump administration's restoration of sanctions on Iran, at the U.S. State Department in Washington, U.S., September 21, 2020. Patrick Semansky/Pool via REUTERS/File Photo

NEW YORK/WASHINGTON (US) – A spokeswoman of the US State Department said on Tuesday that all travel this week, including the Taiwan visit of US Ambassador to the UN Kelly Craft, has been cancelled.

She was due to visit Taiwan from Wednesday to Friday, prompting neighbouring China to issue a warning saying Washington was playing with fire.

On Tuesday, Secretary of State Mike Pompeo said all travel this week had been cancelled and that includes his trip to Europe. This comes as part of the transition to the administration of President-elect Joe Biden.

According to sources and European diplomats, Luxembourg’s foreign minister and key EU officials had declined to have a meeting with Pompeo during his planned visit to Europe.

Beijing was miffed by the enhanced support offered by the US to Taiwan, including visits by high-profile officials, further straining ties between Beijing and Washington.

On Saturday, Pompeo said he was lifting curbs on contacts between US and Taiwan officials.

Regarding the cancellation of the visit, the Taiwan government expressed “understanding and respect” for the decision as well as regret.

“The Ministry of Foreign Affairs regrets that the US Ambassador to the United Nations Kelly Craft cannot lead a delegation to visit Taiwan from Jan. 13 to 15 as scheduled, but welcomes Ambassador Craft to visit at an appropriate time in the future,” Taipei said in a statement.