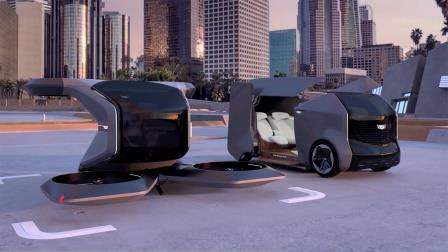 Two futuristic Cadillac concepts, an electric shuttle and an autonomous vertical take-off and landing (VTOL) drone, are seen in a still image from video presented by General Motors (GM) at the 2021 CES show on January 12, 2021. GM/Handout via REUTERS

DETROIT (US) – General Motors Co on Tuesday unveiled a self-propelled vehicle which can take off and land vertically apart from carrying passengers above the streets.

According to a senior GM executive, the flying Cadillac reimagines the future of personal transportation.

The vehicle, which is designed to carry one passenger, is a vertical take-off and landing (VTOL) drone in effect. One can travel from urban rooftops at a speed of up to 55 miles an hour.

Electric and completely automated, the vehicle sports a 90kW motor, a GM Ultium battery pack and an ultra-lightweight body. It has four pairs of rotors.

It was presented in a video during an online keynote presentation by CEO Mary Barra, along with a family-friendly Cadillac electric shuttle. In 2020, she had revealed the firm was looking at alternative forms of transportation such as aerial taxis.

The concepts in the CES video were explained by GM design chief Mike Simcoe, who described the VTOL as “the Cadillac of urban air mobility”.

“VTOL is key to GM’s vision for a multimodal future,” he said.