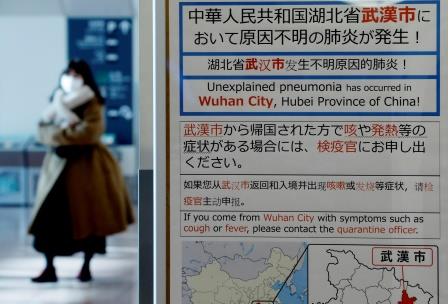 FILE PHOTO: A woman wearing a mask walks past a quarantine notice about the outbreak of coronavirus in Wuhan, China at an arrival hall of Haneda airport in Tokyo, Japan, January 20, 2020. REUTERS/Kim Kyung-Hoon

TOKYO (JAPAN) – The Japanese government has decided to prohibit the entry of business travellers from 11 nations and regions including China and South Korea that are still allowed to enter the country, the Nikkei said in a report on Wednesday. This comes as part of efforts to stem the spread of the coronavirus.

Last month, the country barred the entry of non-resident foreigners following the detection of a highly contagious variant of the novel coronavirus in Britain and South Africa. However, it had continued to permit some travellers under its “business track.”

The latest move comes as the country is experiencing a surge in the number of new cases and the government is taking steps to extend a state of emergency it had declared in Tokyo area last week to seven more prefectures.

The measure will come into effect Thursday through Feb. 7 when the state of emergency is planned to be lifted, reported the Nikkei.