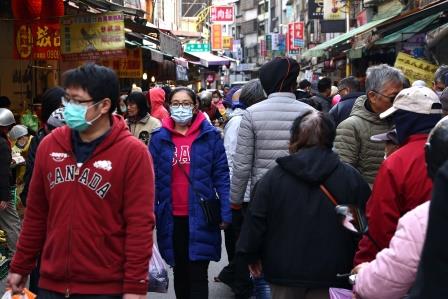 FILE PHOTO: Customers wear protective masks to prevent the spread of the coronavirus disease (COVID-19) while shopping at a market in Taipei, Taiwan, January 10, 2021. REUTERS/Ann Wang

TAIPEI (TAIWAN) – The health authorities of Taiwan said on Wednesday that they have confirmed the first case of the highly infectious mutant variant of the coronavirus detected in South Africa in an eSwatini national who is undergoing treatment in hospital.

The Central Epidemic Command Centre said the variant was confirmed on Tuesday during a laboratory test.

The patient, a man in his 30s, had arrived in Taiwan to work on December 24 and manifested symptoms while in quarantine. It was initially confirmed to be COVID-19 on Jan. 3.

The small, landlocked southern African country of eSwatini, which used to be called Swaziland, is the only diplomatic ally of Taiwan on the continent.

After testing positive for the virus, its prime minister Ambrose Dlamini died in a South African hospital last month.

From Thursday, anyone arriving from South Africa or eSwatini or who had visited those nations over the last two weeks, would have to undergo quarantine at a centralised facility and that applies to those arriving from Britain, said the command centre.