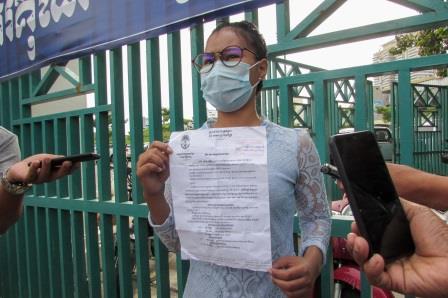 FILE PHOTO: Ley Leak, a former deputy from the dissolved Cambodia National Rescue Party, holds a paper after arriving at the court for the treason trial of more than 100 opposition figures, in Phnom Penh, Cambodia November 26, 2020. REUTERS/Heng Mengheang

PHNOM PENH (CAMBODIA) – A Cambodian court has begun the hearing of members of the dissolved opposition party – the Cambodia National Rescue Party (CNRP)- who were charged with treason. The court convened on Thursday. Activists believe this as a move by the ruling party to sideline threats to its political monopoly.

The defendants are among 121 people affiliated to CNRP, who are charged with treason and incitement.

Sixty-one opposition figures have been summoned to appear in court, Mu Sochua, CNRP’s deputy president who is in the United States said. With many in exile fearing an unfair trial, it was not immediately clear how many would show up.

Before the 2018 election, the CNRP was banned and its leader Kem Sokha was arrested, accusing him of conspiring with the United States to overthrow Hun Sen. Both Sokha and Washington has reject the claims. The arrest allowed the current Prime Minister Hun Sen’s Cambodian People’s Party to win every parliamentary seat, raising international concern.

“The real purpose of the charges against me is to silence me,” she said in a statement.

Mu Sochua said in an email she would lead exiled party members and activists to Cambodia on Sunday to defend themselves in court, which she said was duty-bound to enable their return.

The government said defendants would be allowed to return to Cambodia but must abide by the court’s decision. “We don’t cause any trouble for them … they can come freely,” said government spokesman Phay Siphan.