‘He must go’: Nancy Pelosy; Trump impeached for second time 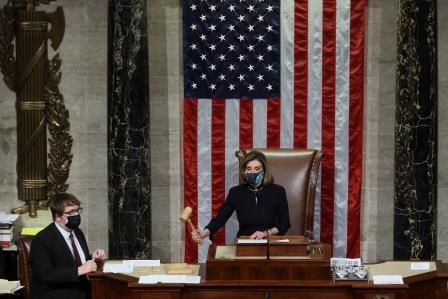 U.S. House Speaker Nancy Pelosi (D-CA) presides over the vote to impeach President Donald Trump for a second time, a week after his supporters stormed the Capitol building, on the floor of the House of Representatives in Washington January 13, 2021. REUTERS/Jonathan Ernst

WASHINGTON (US) – Following the insurrection of the US Capitol last week, Donald Trump was impeached in the House of Representatives. With this, he becomes the first president in U.S. history to be impeached twice. Ten of his fellow Republicans joined Democrats to charge him with inciting the insurrection.

The vote in the Democratic-controlled House was 232-197. However, with Democratic President- elect set to take office on Jan 20, it appears unlikely that the swift impeachment would lead to Trump’s ouster before his term ends.

The impeachment took place inside a heavily guarded Capitol, where thousands of rifle-carrying National Guard troops stood alert both inside and outside the Capitol.

“The president of the United States incited this insurrection, this armed rebellion against our common country,” House Speaker Nancy Pelosi, a Democrat, said on the House floor before the vote. “He must go. He is a clear and present danger to the nation that we all love.”

At a later ceremony, she signed the article of impeachment before it is sent to the Senate, saying she did it “sadly, with a heart broken over what this means to our country.”

Senate’s Republican majority leader, Mitch McConnell, rejected Democratic calls for a quick impeachment trial, saying there was no way to conclude it before Trump leaves office.

What the Senate Conviction means for Trump is that it will lead to a vote on banning him from running for office again.

The House passed a single article of impeachment – a formal charge – accusing Trump of “incitement of insurrection,” focused on an incendiary speech he delivered a week earlier to thousands of supporters shortly before the pro-Trump mob rampaged through the Capitol.

Ten Republicans voted to impeach, including Liz Cheney, the No. 3 House Republican.

“I am not choosing a side, I’m choosing truth,” Republican Jamie Herrera Beutler said in announcing her support for impeachment, drawing applause from Democrats. “It’s the only way to defeat fear.”

In a break from standard procedure, Republican House leaders refrained from urging their members to vote against impeachment, calling the vote a matter of individual conscience.

Impeachment is a remedy devised by America’s 18th century founders to enable Congress to remove a president who has, according to the Constitution, committed “treason, bribery or other high crimes and misdemeanors.” If Trump were removed before Jan. 20, Vice President Mike Pence would become president and serve out his term.

No U.S. president has ever been removed from office through impeachment. Three – Trump in 2019, Bill Clinton in 1998 and Andrew Johnson in 1868 – previously were impeached by the House but acquitted by the Senate.