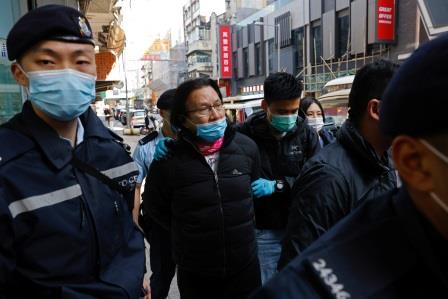 Daniel Wong Kwok-tung, a lawyer who tried to help the 12 people detained in mainland China, is escorted by police as he returns to his office in Hong Kong, China, January 14, 2021. REUTERS/Tyrone Siu

HONG KONG – Police have arrested 11 people suspected of assisting a group of 12 pro-democracy activists who were accused of attempting to flee the city by boat for Taiwan, last year.

Those arrested are aged between18 to 72 and also include women, according to local broadcaster RTHK.

Daniel Wong, a lawyer who tried to help the 12 people detained in mainland China last August, was among those arrested.

Wong wrote on Facebook that police arrived at his apartment at 6 a.m. local time.

In late December, a Chinese court had sentenced 10 of them to between seven months and three years in prison for illegally crossing the border. Two, who were minors at the time of arrest, have been returned to Hong Kong.

Families of detainees’ said they had been denied access to independent lawyers and raised their doubts regarding the role Hong Kong authorities played in the arrests.

The United States and European Union have raised their objection to the arrests. They have called for the activists to be released and allowed to return to Hong Kong.

WHO team arrives in China's Wuhan