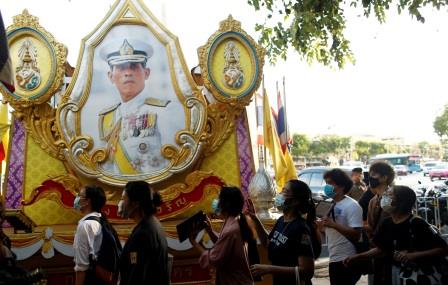 BANGKOK (THAILAND) – Thai police on Thursday arrested a student activist after he was accused of defacing portraits of King Maha Vajiralongkorn.

Sirichai Nathuang, 21, a student at Bangkok’s Thammasat University, is one of at least 40 activists charged with “lese majeste” since November amid protests demanding the resignation of former junta leader Prime Minister Prayuth Chan-ocha.

The youth-led movement has been demanding reforms to the monarchy, which led to resumption of use of the lese majeste law, which had not been invoked since 2018. Breaches of the law, or section 112 of the criminal code, carry penalties of up to 15 years in prison.

Portraits of the king are a common sight in city streets in Thailand. Sirichai was accused of spray-painting messages on some of those portraits earlier this week and was arrested on Wednesday night, said Noraset Nanongtoom of the Thai Lawyers for Human Rights group.

“Sirichai denied all accusations and will fight the case,” the lawyer added.

Defacing a royal portrait was almost unheard of during the reign of the king’s father, who died in 2016 after 70 years on the throne.

Noraset said Sirichai is accused by police of spraying messages calling for the abolition of the lese majeste law.

Police deputy spokesman Kissana Phathanacharoen said police acted in accordance with the law. “There are no double standards,” he said.

A government spokesman last week said use of the law against some of the protesters was justified.