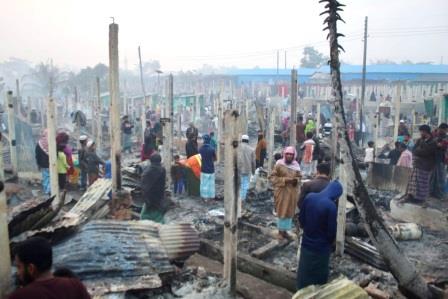 A view of burned houses after a fire broke out at the Nayapara refugee camp in Cox's Bazar, Bangladesh, January 14, 2021. REUTERS/Mohammed Arakani

Bangladesh – A massive fire that swept through the Rohingya refugee camps in southern Bangladesh in the early hours of Thursday has destroyed homes of thousands of refugees.

The U.N. Refugee Agency (UNHCR) informed that the fire destroyed more than 550 shelters, home to around 3,500 people. Some of the homes were either totally or partially destroyed. Nearly 150 shops and a facility belonging to a non-profit organization were also destroyed.

“E block is completely burned down,” said the refugee, Mohammed Arakani. “There is nothing left. There was nothing saved. Everything is burned down.”

UNHCR said it was providing shelter, materials, winter clothes, hot meals, and medical care for the refugees displaced from the camp in the Cox’s Bazar district, a small piece of land bordering Myanmar in southeastern Bangladesh.

“Security experts are liaising with the authorities to investigate on the cause of fire,” the agency said, adding that no casualties were reported.

Mohammed Shamsud Douza, the deputy Bangladesh government official in charge of refugees, said the fire service took two hours to put out the fire. However, their efforts were hampered by the explosion of gas cylinders inside homes.

The fire destroyed part of a camp inhabited by Rohingya who fled Myanmar after an earlier military campaign, according to refugees.