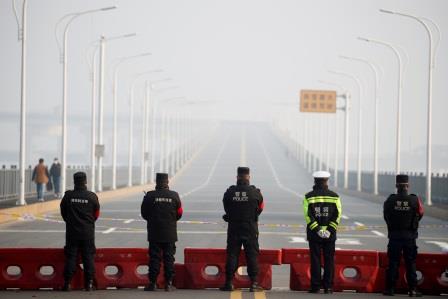 FILE PHOTO: Police stand at a checkpoint at the Jiujiang Yangtze River Bridge that crosses from Hubei province in Jiujiang, Jiangxi province, China, as the country is hit by an outbreak of a new coronavirus, January 31, 2020. REUTERS/Thomas Peter

SHANGHAI (CHINA) – China benefited from pandemic lockdowns and strict industrial controls last year according to government. A data released by the Ministry of Ecology and Environment stated that the restrictions have led to better air quality.

According to the ministry, concentrations of lung-damaging small particles known as PM2.5 in 337 cities fell an average 8.3% to 33 micrograms per cubic metre over the year.

The smog-prone region that includes Beijing, the city of Tianjin and the province of Hebei saw average PM2.5 levels drop 10.5% to 51 micrograms per cubic metre, though that was still higher than the national standard of 35 micrograms.

The World Health Organization recommends annual mean concentrations of no more than 10 micrograms.

Smog experts have raised concern that some northern cities in China might not hit the winter pollution targets after a surge in the production of steel and cement.

Data for December showed, however, that despite the production hikes, average PM2.5 concentrations fell 3.6% to 53 micrograms per cubic metre. The Beijing-Tianjin-Hebei region also saw concentrations decline, down 6.2% to 76 micrograms, with the region benefiting from windy weather.

The country also saw improved water quality last year. Some 85% of surface water samples taken from nearly 2,000 sites across the country met standards for human use, up 7 percentage points over 2019.

WHO-led team in China will hold online meetings during quarantine

WHO-led team in China will hold online meetings during quarantine