Japan in need of a financial reform amid COVID – Aso 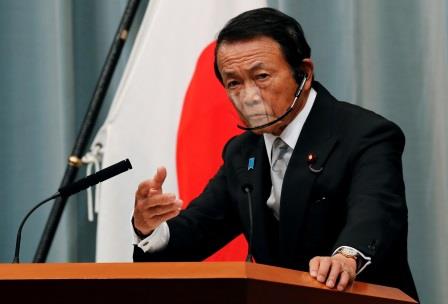 Speaking to reporters after a cabinet meeting, Aso said Japan has so far avoided a spike in government bond yields and a sudden yen selling, thanks in part to the Bank of Japan’s monetary easing.

“Given a jump in new bond issuance, however, the need for fiscal reform has become even more severe,” Aso said. “We must cope with the coronavirus and achieve our primary aim of economic revival and fiscal reform,” Aso said.

Japan’s cabinet decided on Friday to spend 741.8 billion yen ($7.15 billion) in emergency reserves to pay up to 1.8 million yen a month to bars and restaurants that comply with shorter hours to prevent the spread of COVID.

The amount, which comes on top of cumulative spending of 5.09 trillion yen, will leave the government with 5.66 trillion yen in coronavirus emergency reserves earmarked in the state budget, the finance ministry said.

Prime Minister Yoshihide Suga’s government put priority on the coronavirus response and economic revival over fiscal reform as it has rolled out a combined $3 trillion in economic packages — two-thirds the size of Japan’s gross domestic product.