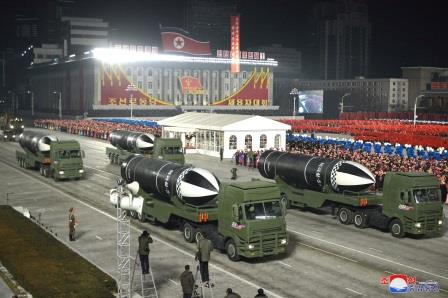 Military equipments are seen during a military parade to commemorate the 8th Congress of the Workers' Party in Pyongyang, North Korea January 14, 2021 in this photo supplied by North Korea's Central News Agency (KCNA). KCNA via REUTERS

SEOUL (SOUTH KOREA) – North Korea showcased what appeared to be a new submarine-launched ballistic missile (SLBM) at a parade on Thursday night, according to state media.

The parade featured rows of marching soldiers, as well as a range of military hardware including tanks and rocket launchers.

Analysts pointed out to what they thought appeared to be new variants of short-range ballistic missiles and SLBMs rolled into the square on trucks.

“The world’s most powerful weapon, submarine-launch ballistic missiles, entered the square one after another, powerfully demonstrating the might of the revolutionary armed forces,” news agency KCNA reported.

Photos released by state media showed the SLBM was labelled Pukguksong-5, potentially marking an upgrade over the Pukguksong-4 that was unveiled at a larger military parade in October.

North Korea has not tested a nuclear bomb or fired its longest-range ICBMs since 2017. However, Kim signaled that he no longer feels bound by that self-imposed moratorium after denuclearisation talks with U.S. President Donald Trump failed.

Japan in need of a financial reform amid COVID – Aso