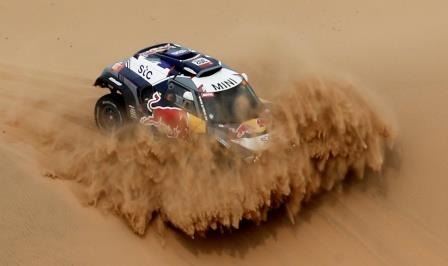 PARIS (FRANCE) – The acclaimed Dakar Rally was won by French veteran driver Stephane Peterhansel for a record-extending 14th time on Friday. In fact, it is his eighth in the car segment after a gruelling 14 days in the deserts of Saudi Arabia.
The 55-year-old champion who drives the X-Raid Mini JCW, first won the event on a motorcycle in 1991 and then went on to drive cars following five more victories on two wheels.
“It’s still the same emotion…there are no easy victories on the Dakar,” said Peterhansel, who is nicknamed “Mr Dakar” for his unprecedented success. He is the first driver to win the rally on three continents.
Honda rider and Argentine Kevin Benavides became the first South American to win the motorcycle title when the 12th and final stage came to a close in Jeddah in the desert kingdom.
The rally first started in 1978 as a race from Paris to the Senegalese capital, Dakar. It moved from Africa for safety reasons in 2009 and is now entirely held in Saudi Arabia after a stint in South America.
The finish on Friday was overshadowed by the death of French amateur rider Pierre Cherpin who had been in an induced coma after he crashed on the seventh stage.
It was the first fatality during this year’s event. Last January, two motorcycle riders died while participating.
Peterhansel finished 14 minutes and 51 seconds ahead of Nasser Al-Attiyah of Qatar, who is a three-time winner.
Spain’s Carlos Sainz, who is the defending champion and Peterhansel’s team mate, won the final stage and came third overall.