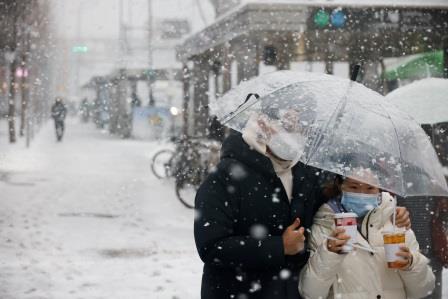 SEOUL (SOUTH KOREA) – After a cluster of COVID infections were recorded, the US Forces in Korea (USFK) said on Saturday it has imposed a shelter-in-place order on two of its largest bases – US Army Garrison Yongsan and Camp Humphreys – until Tuesday.

It was not immediately clear how many cases have been reported at the two bases, but the Korea Disease Control and Prevention Agency (KDCA) said on Saturday a total of 18 people related to the U.S. base in Seoul tested positive this week so far. The command has been relatively successful in keeping infections down to a handful.

The new cluster was reported as COVID-19 vaccines are being administered to U.S. troops in the country.

Camp Humphreys in Pyeongtaek, south of Seoul, is the largest U.S. military base overseas, housing the USFK headquarters and thousands of troops, civilian workers, and their family members.

South Korea reported 580 new cases of novel coronavirus infection as of midnight on Friday, bringing total infections to 71,820, with 1,236 deaths. , Health minister Kwon Deok-cheol told a briefing on Saturday that the country will extend current social distancing guidelines in the densely populated capital and surrounding areas for another two weeks as they have significantly curtailed infections.

“Although it has halted the spread of the third wave of the pandemic and turned into a downward trend, we are not yet in the place where we could let our guard down,” Kwon said.