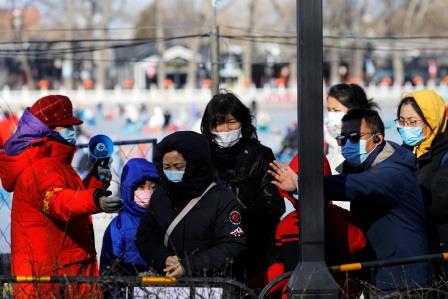 FILE PHOTO: A woman directs people to have their temperatures checked before entering a frozen lake which has been turned to an ice rink, following the coronavirus disease (COVID-19) outbreak, in Beijing, China January 16, 2021. REUTERS/Tingshu Wang

BEIJING (CHINA) – After authorities on Sunday reported 109 new COVID-19 cases, Mainland China is concerned about a potential new wave of coronavirus cases with the Lunar New Year falling next month. Most of the cases were reported from the Hebei province surrounding Beijing.

The unsettling trend has emerged while a World Health Organization-led (WHO) team of investigators remained in quarantine in the city of Wuhan, where the disease was first detected in late 2019. The team aims to investigate the origins of the pandemic that has now killed over 2 million people worldwide.

Giving details of the latest daily caseload, the National Health Commission (NHC) said 96 were local infections, 72 of them in Hebei, 12 in northeastern Heilongjiang province, 10 in northeastern Jilin province and two in Beijing.

The number of new asymptomatic cases, which China does not classify as confirmed cases, rose to 119 on Saturday from 79 on Friday.

NHC Minister Ma Xiaowei said on Saturday that outbreaks in the northeast have come from travellers entering the country or contaminated frozen food imports. China is the only country to claim COVID-19 can be transmitted via cold chain imports, even though the WHO has downplayed the risks.

The total of confirmed COVID-19 cases in mainland China stands at 88,227, while the death toll remains unchanged at 4,635.