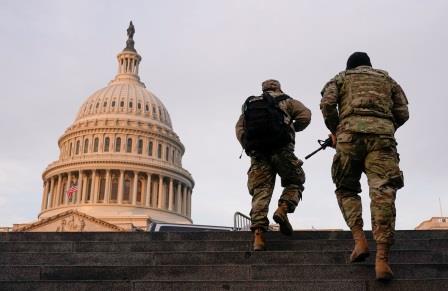 Michigan, Virginia, Wisconsin, Pennsylvania and Washington were among more than a dozen states that activated their National Guards to strengthen security. Meanwhile, downtown, Washington DC saw battalions of camouflaged National Guard soldiers taking up positions across the city center.

The nationwide security scramble followed the deadly Jan. 6 attack on the U.S. Capitol by a mix of extremists and Trump supporters, some of whom called for the death of Vice President Mike Pence as he presided over the certification of Biden’s election victory.

The Democratic leaders of four US congressional committees said on Saturday they had opened a review of the events and had written to the FBI and other intelligence and security agencies asking what was known about threats, whether the information was shared and whether foreign influence played any role.

“This still-emerging story is one of astounding bravery by some US Capitol Police and other officers; of staggering treachery by violent criminals; and of apparent and high-level failures — in particular, with respect to intelligence and security preparedness,” said the letter.

In Michigan, a fence was erected around the Capitol in Lansing, and troopers were mobilized from across the state to boost security. The legislature canceled meetings next week, citing concern over credible threats.

The perception that the Jan. 6 insurrection was a success could embolden domestic extremists motivated by anti-government, racial and partisan grievances, spurring them to further violence, according to a government intelligence.

Some militias across the country have told followers to stay home this weekend, citing the increased security or the risk that the planned events were law enforcement traps.