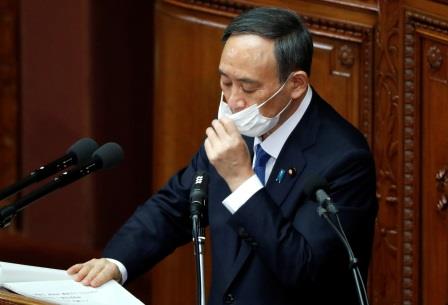 Japan's Prime Minister Yoshihide Suga adjusts his face mask as he delivers his policy speech at the opening of the Lower House parliamentary session in Tokyo, Japan January 18, 2021. REUTERS/Issei Kato

Suga this month issued a state of emergency for Tokyo and three surrounding prefectures in a bid to curb rising infections. He expanded it to seven more prefectures, including Osaka and Kyoto in western Japan.

“What is important is to provide necessary medical services to people in need. We will exhaust all measures to safeguard the medical system,” Suga said in his policy speech at the start of a regular session of parliament.

“We are all ready to deploy the Self-Defence Forces’ medical team if requested by governors.”

The outbreak has forced Japan to largely shut its doors to foreigners and limit large-scale events. Administrative reform minister Taro Kono expressed his doubts that the once-delayed Tokyo Olympics may not go ahead as planned.

But Suga restated his resolve to host the Games this summer.

“We will press ahead with preparations, with determination of building watertight anti-infection measures and holding an event that can bring hope and courage to the world,” he said.