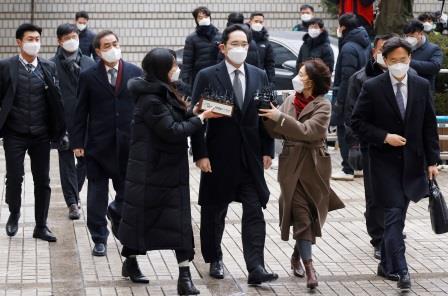 SEOUL (SOUTH KOREA) – A South Korean court has sentenced Samsung Electronics vice chairman Jay Y Lee to two and a half years in prison. The ruling will have major consequences for his future in the tech giant as well as Korea’s views toward big business.

With this, Lee will be sidelined from major decision making at Samsung Electronics and from overseeing the process of inheritance from his father, who died in October.

In 2017, Lee was convicted of bribing an associate of former President Park Geun-hye and jailed for five years . He denied wrongdoing, the sentence was reduced and suspended on appeal, and he was released after serving a year.

However, the Supreme Court sent the case back to the Seoul High Court, which issued the ruling on Monday.

Under South Korean law, only a jail term of three years or fewer can be suspended. For longer sentences, the person must serve out the term barring a presidential pardon. With Lee returning to jail, the year he already served in detention is expected to count toward the sentence.

Monday’s sentencing can be appealed to the Supreme Court, since the Supreme Court has already ruled on it once, chances are lower that it’s legal interpretation will change, legal experts said.

“In a case sent back by the Supreme Court, there is a narrower range of options for the judges’ bench… but it’s also true that the Supreme Court can’t really touch the final court’s sentencing,” said Rha Seung-chul, a lawyer not connected with the case.