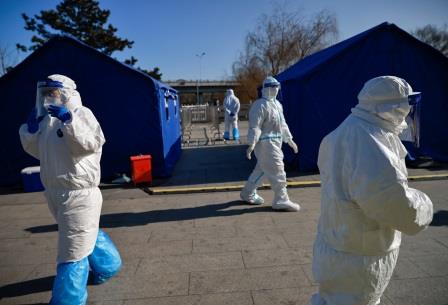 SHANGHAI (CHINA) – With the nation reporting more than 100 cases on Tuesday, China seems to be tackling the worst COVID outbreak since March 2020. It posted 118 new cases on Monday, up from 109 a day earlier, the national health authority said in a statement.

The country recorded 106 local infections, with 43 reported in Jilin, a new daily record for the northeastern province and 35 in Hebei province, which surrounds Beijing, the National Health Commission said.

The Chinese capital itself reported one new case, while Heilongjiang in the north reported 27 new infections.

An independent panel reviewing the global pandemic, led by former New Zealand prime minister Helen Clark and former Liberian president Ellen Johnson Sirleaf, said on Monday that China could have done more to curb the initial outbreak. However, a state-backed tabloid defended China’s early handling of COVID-19, stating no country had any experience in dealing with the virus.

“Looking back, no country could perform perfectly in facing a novel virus… No country can guarantee they won’t make mistakes if a similar epidemic occurs again,” it said.

With the Lunar New Year holiday just weeks away, authorities are worries that undetected infections could spread quickly.

Since hundreds of people travel during the holiday, authorities have appealed to people to avoid travel in the run-up to the holiday and stay away from mass gatherings such as weddings.

The total number of confirmed COVID-19 cases in mainland China is 89,454, while the death toll remained unchanged at 4,635.

Chinese Foreign Ministry spokeswoman, Hua Chunying acknowledged that China should do better but added that “it doesn’t mean it hadn’t done good enough.”

“Of course we should strive to do better, as should all other countries such as the United States, Britain, Japan,” Hua said at a regular news briefing on Tuesday, when asked about the review by the independent panel.

Kazakhstan – Six million to get COVID vaccine shot this year