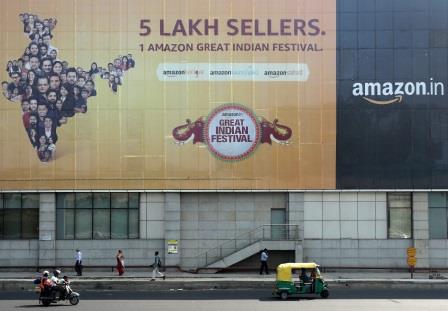 NEW DELHI (INDIA) – In a move that could compel players, including Amazon.com Inc, to restructure their ties with some major sellers, Indian administration is planning to revise its foreign investment rules for e-commerce, according to sources and a government spokesman.

The move comes at a time when growing number of India’s bricks-and-mortar retailers have raised complaints for years regarding complex structures created by Amazon and Walmart Inc-controlled Flipkart to bypass federal rules. Allegations the US companies have denied.

India only allows foreign e-commerce players to operate as a marketplace to connect buyers and sellers. It prohibits them from holding inventories of goods and directly selling them on their platforms.

In 2018, Amazon and Walmart’s Flipkart were last hit by changes in investment rule that barred foreign e-commerce players from offering products from sellers in which they have an equity stake.

Now, the government is considering adjusting some provisions to prevent those arrangements, even if the e-commerce firm holds an indirect stake in a seller through its parent, sources said.

The changes could hurt Amazon as it holds indirect equity stakes in two of its biggest online sellers in India.

Amazon, however said through an emailed statement that e-commerce helped create “huge job opportunities” and is a significant contributor to economic growth. They added that “Any major alterations” to the policy will adversely impact small- and medium-sized business.

Not only did the 2018 rule force Amazon and Flipkart to rework their business structures, it soured relations between India and the United States, as Washington said the policy change favoured local e-tailers over US ones.

India’s e-commerce retail market is seen growing to $200 billion a year by 2026, from $30 billion in 2019, the country’s investment promotion agency Invest India estimates.

Domestic traders have been unhappy about the growth. They see foreign e-commerce businesses as a threat to their livelihoods and accuse them of unfair business practices that use steep discounts to target rapid growth. The companies deny they are acting unfairly.

“The way the government is thinking is that marketplaces are not doing what they are supposed to do. The government wants to tinker with the nuts and bolts of the policy,” said a source.

In the face of growing trader complaints and an antitrust investigation, India’s trade minister Piyush Goyal last year said Amazon was not doing “a great favour to India” by making fresh investments.

Among other changes, the government is considering changes that would effectively prohibit online sales by a seller who purchases goods from the e-commerce entity or its group firm, and then sells them on the entity’s websites.

Under existing rules, a seller is free to buy up to 25% of its inventory from the e-commerce entity’s wholesale or another unit and then sell them on the e-commerce website.

E-commerce saw a boom in India last year when the COVID-19 pandemic drove more shoppers online. Flipkart, in which Walmart invested $16 billion in 2018, and Amazon are among the top two players.

“E-commerce has already made its mark for itself in the country, particularly during COVID-19,” Commerce Ministry’s Baweja said. “They are bound to grow and a conducive environment should be there, which is good for the brick-and-mortar as well as e-commerce.”