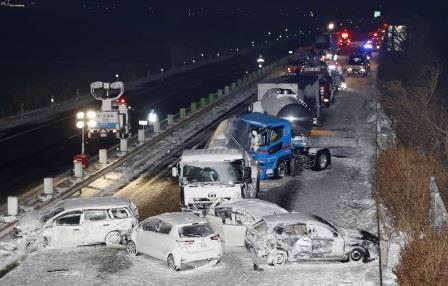 General view shows the site where cars were involved in a series of crashes when a snow storm struck a stretch of highway on the Tohoku Expressway in Osaki, Miyagi prefecture, northern Japan January 19, 2021. Kyodo via REUTERS ATTENTION EDITORS - THIS IMAGE WAS PROVIDED BY A THIRD PARTY. MANDATORY CREDIT. JAPAN OUT. NO COMMERCIAL OR EDITORIAL SALES IN JAPAN.

TOKYO (JAPAN) – A blizzard struck a stretch of highway in Japan has led to a series of car crashes, injuries and a death.

At least 134 cars were involved in a series of crash that occurred on the Tohoku Expressway on Tuesday. The mishap occurred around noon when on a stretch of road about 1 km (half a mile) long, the government said.

Despite a speed limit of 50 kph (31 mph), around 200 people were caught up in the crashes out of which12 were sent to hospital, the disaster management agency said.