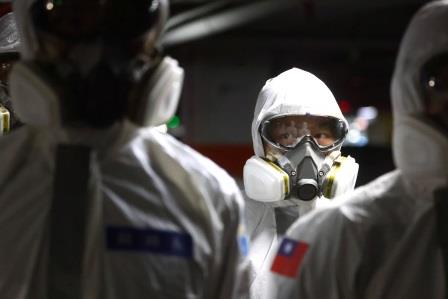 Soldiers prepare to spray disinfectant at the Taoyuan General Hospital, where a cluster of coronavirus disease (COVID-19) infections was detected, in Taoyuan, Taiwan, January 19, 2021. REUTERS/Ann Wang

TAIPEI (TAIWAN) – Taiwan scrapped ‘The Taiwan Lantern Festival’, an annual celebration to mark the end of the upcoming Lunar New Year, as the island reported four locally transmitted COVID cases, the Ministry of Transportation and Communications said on Tuesday.

For Taiwan which has kept the pandemic well under control, these new cases are the biggest daily rise in local infections in nearly 11 months.

“This is a tough decision, but pandemic-prevention is our top priority,” Transportation Minister Lin Chia-lung told reporters.

The festival, which features oversized lanterns and fireworks displays, attracts thousands of visitors every year.

Lin Chih-chien, mayor of the northern city of Hsinchu where the festival was to be held, said several tech companies there had asked the government to cancel the event, citing concerns of a local outbreak curtailing production at a technology hub that hosts firms including the world’s largest chipmaker Taiwan Semiconductor Manufacturing Co Ltd.

“We strongly recommend that large-scale events be cancelled,” Health Minister Chen Shih-chung told a separate news conference. “The situation is under our control at the moment because the cases can be clearly traced.”

Taiwan has reported 868 cases, the majority of which were imported, including seven deaths, with 102 in hospital being treated.