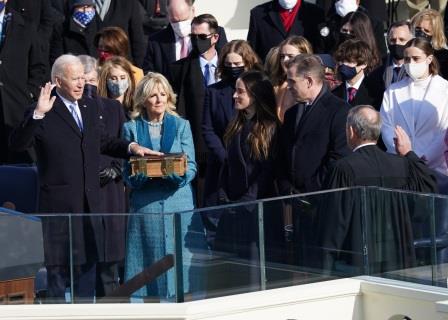 Joe Biden is sworn in as the 46th President of the United States as his wife Jill Biden holds a bible on the West Front of the U.S. Capitol in Washington, U.S., January 20, 2021. REUTERS/Kevin Lamarque

WASHINGTON (US) – Democrat Joe Biden was sworn in as president of the United States on Wednesday. With his hand on an heirloom Bible that has been in his family for more than a century, Biden took the presidential oath of office administered by U.S. Chief Justice John Roberts just after noon (1700 GMT), vowing to “preserve, protect and defend the Constitution of the United States.”

Biden,78, takes office at a time of deep national unease, with the country facing what his advisers have described as four compounding crises: the pandemic, the economic downtown, climate change and racial inequality.

Biden, who has vowed to “restore the soul of America.” He has promised immediate action, including a raft of executive orders on his first day in office.