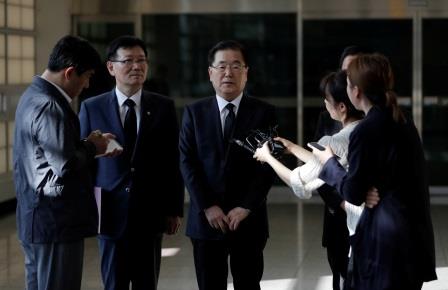 Chung Eui-yong, 74, who had spent three years as Moon’s security adviser until he retired last July, will replace Kang Kyung-wha as foreign minister. Though Chung who was partly blamed for a failed summit between North Korea and the United States in 2019, the new position is being seen as a bid to help revive stalled denuclearisation talks with North Korea.

Chung had stepped in to mediate between the two countries as President Moon Jae-in’s top security adviser. In 2018 he made a surprise announcement on the White House lawn that US President Donald Trump would hold a summit with North Korean leader Kim Jong Un. However, he was accused of misleading both sides about the potential for agreement after their second summit in Vietnam failed to take off.

The move came two days after Moon urged Biden to hold dialogue with North Korea to build on progress made by Kim and Trump at their first meeting.

Chung’s nomination is to “breathe new life into the lineup of diplomats and regroup their forces in time for the inauguration of the Biden administration,” a presidential official told reporters.