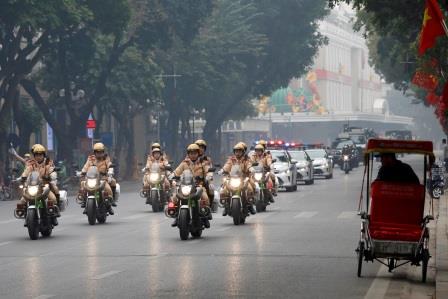 A man cycles on a traditional three-wheeled cyclo around Hoan Kiem lake as security forces patrol ahead of the upcoming 13th national congress of the Communist Party of Vietnam in Hanoi, Vietnam January 20, 2021. REUTERS/Kham

HANOI (VIETNAM) – With the ruling party gearing up for its most important meeting in years, its leadership has unleashed an intensified crackdown on dissent, according to rights groups, activists .

The crackdown has left some international human rights groups and lawmakers questioning whether Vietnam has breached the spirit of trade agreements with Western countries – accords that helped catapult the countries economy.

A record number of political prisoners, longer jail terms, and increased harassment of activists in recent years have contributed to the crackdown ahead of this week’s Communist Party congress.

“I have been summoned by the police several times since December 9, 2020,” said Nguyen Quang A, a veteran activist in Hanoi, declining to detail the circumstances saying he was subject to an ongoing investigation. He added that Vietnam’s security ministry had in recent weeks rounded up other government critics without saying why, citing his contacts with activists.

“They (the police) summon them and find reasons to convict them under those very fuzzy articles of criminal law. It completely violates the law but they use it very regularly,” said Quang A. “I’ve told them they can’t shut me up.”

The Communist Party of Vietnam, led by 76-year-old Nguyen Phu Trong, is not open to criticism and controls domestic media tightly, although they are known to have an increasing openness to social change and reforms.

According to data based on state media reports, 280 people were arrested for “anti-state” activities over the five years since the last Party congress: 260 were convicted, many being sentenced to more than 10 years in jail. In the five years leading up to the 2016 congress, there were 68 arrests and 58 convictions.

Amnesty International stated that it had recorded the most “prisoners of conscience” in Vietnam since it began publishing figures in 1996.

In late 2017, Vietnam unveiled a 10,000-strong military cyber unit, Force 47, to counter what it said were “wrong” views on the internet. According to rights groups, the unit also recruits volunteers online to target dissidents and activists.

Vietnam drew international condemnation this month when it sentenced three freelance journalists known for criticism of government to between 11 and 15 years in prison, finding them guilty of spreading anti-state propaganda. Speaking up about the incident, UN human rights office said, “Coming just weeks ahead of the Party congress, the convictions and long sentences are not only a blatant suppression of independent journalism but also a clear attempt to create a chilling effect among those willing to criticise the government.”

The ruling party does not tolerate public criticism of the Party and groups which promote democratisation are targeted by the authorities in a battle playing out online on platforms like Facebook, Vietnam’s most preferred platform for both e-commerce and dissent.

Last November, Vietnam threatened to shut Facebook down if it didn’t toughen rules on local political content on the platform.

Though the country’s constitution says it protects “freedom of opinion and speech, freedom of the press, access to information, to assemble, form associations and hold demonstrations”, the reality is different.