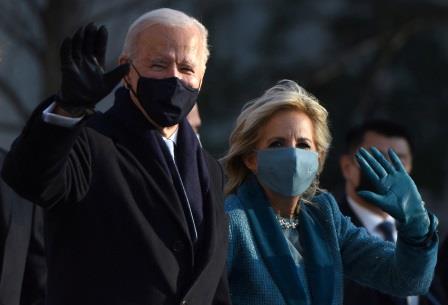 FILE PHOTO: U.S. President Joe Biden and first lady Jill Biden wave at the crowd as they head to the White House after the 2021 inauguration, in Washington, U.S., January 20, 2021. REUTERS/Callaghan O'Hare

TAIPEI (TAIWAN) – In a move that ensured US-Taiwan ties are off to a good start under President Joe Biden’s government, the island’s de facto ambassador was officially invited to attended the Presidential inauguration for the first time.

While former President Donald Trump’s administration strengthened support for Taiwan, the island had raised concern that Biden administration might not be as helpful.

Emily Horne, spokeswoman for the White House National Security Council, said the US commitment to Taiwan was “rock-solid” after the island’s de facto ambassador in Washington, Hsiao Bi-khim, attended Biden’s swearing in on Wednesday.

“President Biden will stand with friends and allies to advance our shared prosperity, security, and values in the Asia-Pacific region – and that includes Taiwan.”

In a video message on her Twitter account, Hsiao said she was honoured to be there representing Taiwan’s government and people.

Taiwan’s foreign ministry said it was the first time an inauguration committee had formally invited the island’s Washington representative and showed the close friendship between Taiwan and the United States based on shared values.

Though Washington is bound by law to provide Taiwan with the means to defend itself, the country ended formal diplomatic ties with Taiwan in 1979 and switched recognition to China.