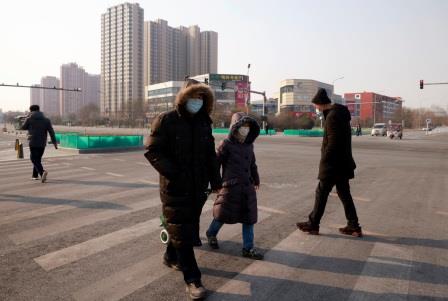 BEIJING (CHINA) – With Shanghai reporting its first locally transmitted cases in two months on Thursday, China is gearing up to set up strict COVID testing requirements during the Lunar New Year holiday season.

Authorities are asking people to stay home during the February holiday season, especially since a majority of China’s 280 million rural migrant workers usually travel home to their villages at this time of year.

Millions of people in the province of Hebei surrounding Beijing and the northeastern provinces of Jilin and Heilongjiang have been put into lockdown in recent weeks.

New restrictions are also being adopted by local governments in areas that have not yet suffered major outbreaks, including one southwestern city that has banned entry to overseas foreigners.

A total of 144 new cases were reported on Jan. 20, the National Health Commission said on Thursday marking the highest number of daily infections since March 1. The number of new asymptomatic cases, which China does not classify as confirmed infections, rose to 113 from 58 a day earlier.

In a notice posted online, China’s National Health Commission said people returning to rural areas from other provinces over the Lunar New Year period would have to produce a negative COVID-19 test taken within seven days.