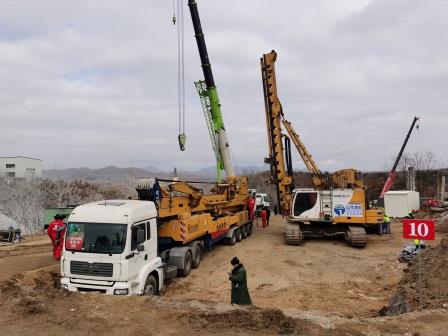 FILE PHOTO: Rescuers are seen at the site where workers were trapped underground after an explosion at the gold mine under construction, in Qixia, Shandong province, China January 20, 2021. China Daily via REUTERS

QIXIA (CHINA) – Miners trapped in the Hushan mine in Qixia since Jan. 10 may have to endure another 15 days before they can be rescued due to a blockage on their intended escape route, officials informed on Thursday.

Rescuers were drilling new shafts on Thursday to reach 10 of the men in the middle section of the mine, more than 600 metres from the entrance, which includes one 711-mm (28-inch) diameter shaft that rescuers hope can be used to bring the survivors out.

A severe blockage 350 metres down was much worse than feared, officials said, adding that it was about 100 metres thick and weights some 70 tonnes.

A total of 22 workers were trapped underground after an explosion at the mine which is a major gold-producing region under the administration of Yantai in Shandong province on the northeast coast.

Authorities have confirmed one death, while 11 are known to be alive. The remaining 10 are missing. Another survivor has been found in a different section.

Though food and medical supplies were sent to the survivors, thick smog, reeking of chemicals, hung over the muddy road leading up to the mine site reducing visibility to a few hundred metres.

Police have sealed off the road to the mine, cutting through muddy apple orchards and warehouses, to ensure rescue efforts are not hampered.

About 600 people are involved in the rescue, with as many as 25 ambulances waiting at the scene.