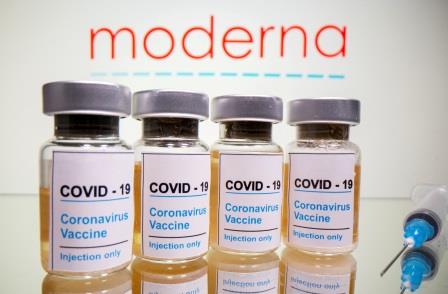 FILE PHOTO: Vials with a sticker reading, "COVID-19 / Coronavirus vaccine / Injection only" and a medical syringe are seen in front of a displayed Moderna logo in this illustration taken October 31, 2020. REUTERS/Dado Ruvic

TOKYO (JAPAN) – A volunteer was given the first test jab of Moderna Inc’s COVID-19 vaccine, on Thursday, its distributor said.

Japan has secured rights to at least 564 million doses of COVID-19 vaccines from several Western developers, the biggest quantity in Asia and more than enough for its 126 million population.

Takeda Pharmaceutical Co, Japan’s biggest drugmaker, announced that it has started combined phase I and II study of 200 adult volunteers in Japan. The company is handling domestic trials, regulatory filing and importation of Moderna’s mRNA-based formula. The government has purchased 50 million doses of the vaccine, enough for 25 million people, contingent on its regulatory approval.

The head of Takeda’s vaccine division informed media that it would likely take several more months to complete the trial, and said securing approval in May was “the best-case scenario.” Takeda is also handling production of Novavax Inc’s vaccine in Japan, with its domestic trial expected to begin next month.

The health ministry said yesterday it increased its order of Pfizer Inc’s COVID-19 vaccine, which is expected to be approved next month.

Prime Minister Yoshihide Suga has vowed to have enough vaccines for the population by June before the Summer Games in Tokyo, scheduled to start on July 23.