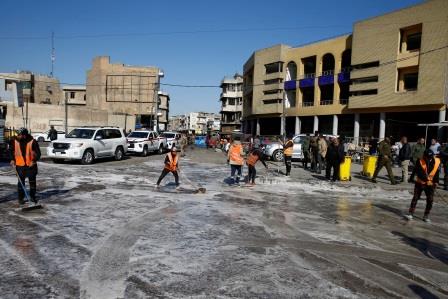 Workers clean the site of a twin suicide bombing attack in a central market in Baghdad, Iraq January 21, 2021. REUTERS/Thaier al-Sudani

BAGHDAD (IRAQ) – Twin suicide bombings in the Baghdad market has killed at least 28 people on Thursday, the first such attack in years, said Iraq’s civil defence chief. He added that there was no immediate claim of responsibility.

The Iraqi military said two attackers wearing explosive vests had blown themselves up among shoppers at a crowded market in Tayaran Square in central Baghdad.

Speaking from the scene of the bombings, Salman said the death toll had risen to 28 from 23 initially reported, with 73 more people wounded.