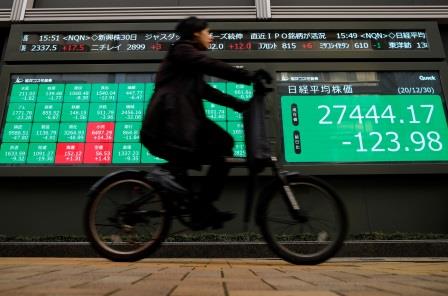 FILE PHOTO: A man rides a bicycle past a screen displaying Nikkei share average and stock indexes outside a brokerage, amid the coronavirus disease (COVID-19) outbreak, in Tokyo, Japan December 30, 2020. REUTERS/Issei Kato

NEW YORK (US) – Global equity benchmarks which were at record highs slipped along with oil prices on Friday as weaker economic data in Japan and Europe and concerns that newly-inaugurated US President Joe Biden’s stimulus plan may face Republican opposition curbed a weeklong rally in risk assets.

Sentiment in Europe was already more cautious after Thursday’s European Central Bank meeting, in which the bank’s message was perceived as more hawkish than expected.

The Euro STOXX 600 was 1% weaker, heading for its worst daily showing of the year so far, as investors digested weaker flash PMI readings for January. Lockdown restrictions to contain the coronavirus pandemic hit the bloc’s dominant service industry.

The FTSE 100 index dropped 0.7% as data showed British retailers struggled to recover in December from a partial coronavirus lockdown the previous month.

Republicans in the U.S. Congress have indicated they are willing to work with Biden on his administration’s top priority, a $1.9 trillion U.S. fiscal stimulus plan, though some are opposed to the price tag.

Though Democrats have taken control of the US Senate, they will still need Republican support to pass the plan.

“The fact that there would be U.S. stimulus was well known and the size of the package and the very high-level details of what they’re aiming for with the package was well known some while ago,” said James Athey, investment director at Aberdeen Standard Investments.

“The realities of what is likely to be achievable relatively quickly are not supportive of just blindly buying cyclical assets. There’s a lot more nuance and a lot more politics to go on before we get there.”

MSCI’s gauge of stocks across the globe shed 0.59% following broad declines in Asia.

The strong expectations that US stimulus will provide continued support for global assets.

In currency markets, the U.S. dollar gained after three straight days of losses, though it was still on track for its biggest weekly loss since mid-December. The dollar index rose 0.193%, with the euro down 0.04% to $1.2157.

The dollar’s recent slide has been led by investors ploughing money into higher-yielding currencies on optimism about a rapid economic recovery led by the US stimulus.

Data from Japan overnight showed that factory activity slipped into contraction in January and the services sector was more pessimistic as emergency measures to combat a COVID-19 resurgence hit sentiment.

In commodities, oil prices were weighed down by worries that new pandemic restrictions in China will curb fuel demand in the world’s biggest oil importer. [O/R]