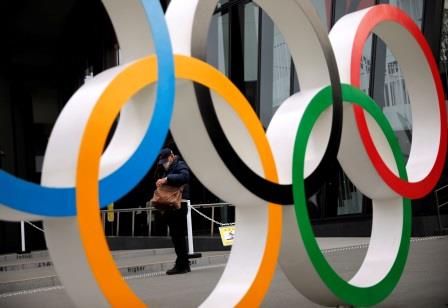 FILE PHOTO: A man wearing a protective mask against COVID-19 is seen through the Olympic rings in Tokyo, Japan January 8, 2021. REUTERS/Issei Kato/File Photo

TOKYO (JAPAN) – Japan flatly denied reports on Friday that the Olympic games will be rescheduled to 2032. A move that is unlikely to quell public fears regarding holding the games amidst a raging pandemic.

A government spokesman said there was “no truth” to a report in The Times that Japan was now focused on rescheduling the event to 2032.

“We will clearly deny the report,” Deputy Chief Cabinet Secretary Manabu Sakai said in a press conference on Friday.

The Tokyo 2020 organising committee also denied the report, saying its partners including the Japanese government and the International Olympic Committee were “fully focused” on going ahead with the games as scheduled.

“Unfortunately, I need to address unfounded rumours that the Tokyo Olympic Games will be cancelled, rumours that only create more anxiety for athletes,” Matt Carroll, the chief executive of the Australian committee, told reporters in Sydney on Friday.

Olympic committees from the United States and Canada Tweeted that they had not received any information suggesting the Games would not happen as planned.

Though much of Japan is under a state of emergency due to a third wave of coronavirus infections, Tokyo organisers remained consist when it came to going ahead with the Games which is scheduled to open on July 23.

However, about 80% of people in Japan do not want the Games to be held this summer, recent opinion polls show, over fears the influx of athletes will spread the virus further.

In an interview ahead of Friday’s report, Tokyo 2020 CEO Toshiro Muto said he was hopeful that successful rollouts of COVID-19 vaccines could help lead to the safe staging of the sporting event.

International Olympic Committee President Thomas Bach reassured his commitment to holding the Games this year in an interview and said “We have at this moment, no reason whatsoever to believe that the Olympic Games in Tokyo will not open on the 23rd of July in the Olympic stadium in Tokyo.”