Nollywood action movies could be the next big thing, thanks to this Nigerian stunt crew 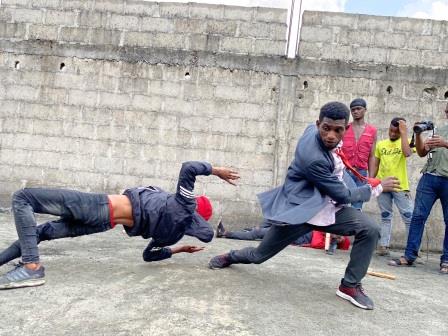 Members of the group 'Xcel Theatre', which hopes to boost interest for action films in Nollywood, imitate scenes from a Chinese action film in Port Harcourt, Nigeria January 8, 2021. REUTERS/Seun Sanni

PORT HARCOURT(NIGERIA) – Nollywood is a multibillion dollar industry churning out movies and TV shows at a rate second only to India’s Bollywood. However, they are mostly known for drama, comedy and romance. Hoping to bring in some hard hitting action into the Nigerian film industry, this Nigerian stunt crew is recreating famous fight scenes.

The 15-member Xcel Theater which started out by posting dance and comedy routines on social media, started posting recreations of famous fight sequences last year. Some of their fight sequences included scenes from “Into The Badlands”, “The Witcher” and “The Raid” as well as scenes featuring actors like Jason Statham and Jet Li.

Producers who spotted their talents have flown them to Lagos to choreograph action sequences for upcoming films in a bid to bolster the genre within Nollywood.

“This started as a result of a passion I have for creative stunt works that I see in most big films,” said Samuel Iyare, the 35-year-old founder of Xcel, at a shoot in Port Harcourt.

Iyare, a fan of Hollywood action films, bankrolls shoots on as little as 30,000 naira ($80) by making furniture – a skill also useful when creating props.

“We dull the edges,” he said while holding a wooden knife. “We paint it to give us the feel of the weapon, then stain it with a little blood so once you are making the motions, it looks as if the person has actually been cut.”

Their attention to detail is what brought the crew to the attention of Nollywood filmmakers.

Olukiran Babatunde Olawale, a director and producer, drafted the group last October to choreograph stunts for Mamba Diamond, an action-comedy about two amateur thieves who mistakenly steal one of the world’s most valuable jewels, set for release in May.

“We were very, very impressed,” said Olawale, who sees a bright future for Nollywood action films featuring the athleticism of fresh talent like Xcel. “They are going to be in a lot of film projects.