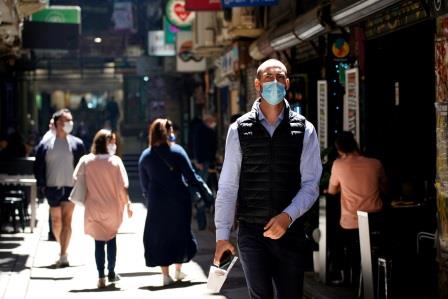 FILE PHOTO: People walk down a city laneway after coronavirus disease (COVID-19) restrictions were eased for the state of Victoria, in Melbourne, Australia, October 28, 2020. REUTERS/Sandra Sanders

As many as 72 players who have arrived for the Australian Open have been confined to their hotel rooms for a two week quarantine upon arrival, after passengers on three charter flights tested positive.

The quarantined player are unable to train for the Grand Slam which is slated to be held from Feb. 8 to 21. While some players are frustrated others have urged their fellow competitors to show more respect for the efforts by the state, which went through one of the world’s strictest and longest lockdowns last year.

Spain’s Paula Badosa on Friday became the first player to confirm a positive test for COVID-19 while in quarantine in Melbourne.

On Saturday, there were three new cases recorded among international arrivals in hotel quarantine in Victoria, the state’s health department said. On Saturday, it logged a sixth straight day of zero COVID cases in the community nationwide. Victoria had recorded around 28,700 cases in total and 909 deaths.