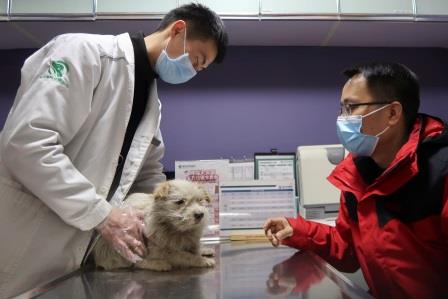 WUHAN (CHINA) – As the first anniversary of the world’s first coronavirus lockdown approaches, animal lovers in the Chinese city of Wuhan are elated that they can finally get back to work.

Wuhan based animal lover and activist Du Fan says his life has returned to something like normal. That means Du and his organisation, the Wuhan Small Animals Protection Association, can focus on rescuing, caring and finding homes for stray cats and dogs.

Twelve months ago, when the city went into lock down after the coronavirus first emerged, Du, 38, and his group were faced with a whole new problem – saving pets who had homes, but whose owners were unable to provide them with daily necessities.

This prompted them to start a project that eventually led to them to save more than 10,000 pets from more than 5,000 households, Du said.

Getting into residential compounds sometimes required the gift of the gab or special passes. And to get into flats, Du’s team would hire locksmiths, with the owner’s consent, to open doors.

Ninety-five percent of the pets left home alone were cats.

“There would be nothing to eat,” Du said.

“The litter box would be full. So the cat had no place to poop. But when you had finished all your work and when this dog or cat had been saved from death because of your effort, you would feel very fulfilled in your heart,” he added.

Du and his teams work benefited the whole community as well. “While helping the owner of the animal, we also helped the whole compound by maintaining its hygiene,” Du said.

Though their project was cut short after two weeks when an even tighter lockdown was enforced, Du said that many pets were able to get through the remaining two months, thanks to his team putting down vast amounts of food and water. They also called up owners to find a way to get back to Wuhan, which many ended up doing.

Du has noticed that since the pandemic, awareness and understanding about animals in some areas has improved, such as with regard to the eating of wild animals, cats and dogs.

It is a tradition to eat such meat in many parts of China but following the pandemic the wild animal trade has been banned.

Du hopes that the lockdown experience has made people more aware of the care their pets need.

“I’ve been telling my friends that no matter what happens to us, we shouldn’t leave our pets alone at home for too long, whether it’s a cat or a dog,” Du said.