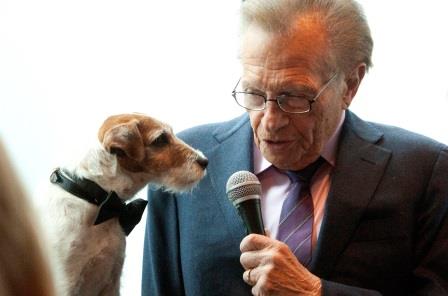 FILE PHOTO: Uggie, the dog from the film "The Artist", is interviewed by Larry King before the start of the Friars Club Roast of Betty White in New York, U.S. May 16, 2012. REUTERS/Andrew Kelly/File Photo

WASHINGTON (US) – Popular US television host Larry King has died at age 87. He had been hospitalized at Cedars Sinai Medical Center in Los Angeles for more than a week.

According to several media reports, King had been hospitalized in Los Angeles with a COVID-19 infection. He had endured health problems for many years, including a near-fatal stroke in 2019 and diabetes.

King had a successful career on television spanning more than six decades through his show “Larry King Live”, which ran from 1985 to 2010. Millions have watched him quiz thousands of world leaders, politicians and entertainers for CNN.

Hunched over his desk in rolled-up shirt sleeves and owlish glasses, he made his show one of the network’s prime attractions with a mix of interviews, political discussions, current event debates and phone calls from viewers.