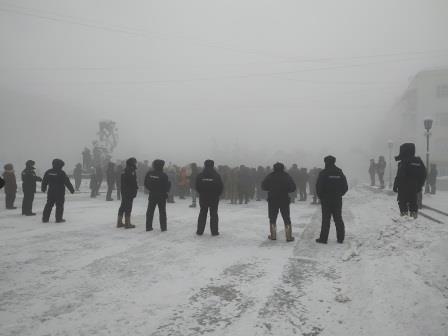 MOSCOW (RUSSIA) – Protesters fought bitter cold and a ban by authorities to demand the release of jailed Kremlin critic Alexei Navalny. Police have detained more than 350 people across Russia on Saturday and broke up rallies around the country.

The OVD-Info protest monitor group said that at least 369 people, including 67 in the Siberian city of Novosibirsk, had been detained so far.

It reported arrests at rallies in nearly 40 towns and cities. Opposition politician Dmitry Gudkov said the scale and sweep of the protests in the regions was unusual.

“Everyone must be really fed up with the stealing and lies if the regions have risen up like this without waiting for Moscow. Hundreds and thousands even in small cities,” he wrote on Twitter.

Navalany had only returned to Moscow for the first time since he was poisoned with a military-grade nerve agent in August, when he was arrested. He then called on his supporters to protests.

In central Moscow, police detained at least 100 people before the protest had even begun, bundling them into nearby vans. Around 1,000 people had gathered before the rally was due to start at 1100 GMT.

Some chanted “Putin is a thief” and “Disgrace” as police swept people off the streets.

Video footage from Vladivostok showed riot police chasing a group of protesters down the street, while demonstrators in Khabarovsk chanted “Bandits!”, braving temperatures of around -14 Celsius

Police in Siberia’s Yakutsk, one of the coldest cities in the world where the temperature was -52 Celsius on Saturday, grabbed a protester by his arms and legs and dragged him into a van, video footage from the scene showed.

Authorities have said the protests are illegal because they had not been properly authorised. Navalny was remanded in custody for 30 days earlier this week for alleged parole violations.

Mobile phone and internet services suffered outages on Saturday, the monitoring site downdetector.ru showed, a tactic sometimes used by authorities to make it harder for protesters to communicate among themselves and share video footage online.

Navalny’s supporters are hoping they can produce a show of anti-Kremlin street support despite winter conditions and the coronavirus pandemic to pressure the authorities into freeing him.