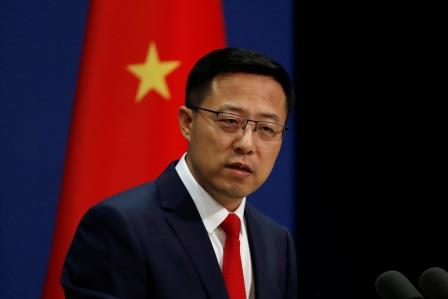 BEIJING (CHINA) – After a US aircraft carrier group sailed into the disputed South China sea, China expressed it’s anger and displeasure at the move.

The US carrier group led by the USS Theodore Roosevelt and accompanied by three warships, entered the waterway on Saturday to promote “freedom of the seas”, the US military said, just days after President Joe Biden took the office.

Chinese foreign ministry responded to this by saying “The United States frequently sends aircraft and vessels into the South China Sea to flex its muscles,” the foreign ministry spokesman, Zhao Lijian, told reporters. “This is not conducive to peace and stability in the region,” he added.

The carrier group entered the South China Sea at the same time as Chinese-claimed Taiwan reported incursions by Chinese air force jets into the southwestern part of its air defence identification zone, prompting concern from Washington.

Trillions of dollars in trade flows through the strategic South China Sea each year and it has long been a focus of contention between Beijing and Washington.

China has repeatedly complained about US Navy ships getting close to islands it occupies in the South China Sea, where Vietnam, Malaysia, the Philippines, Brunei and Taiwan all have competing claims.