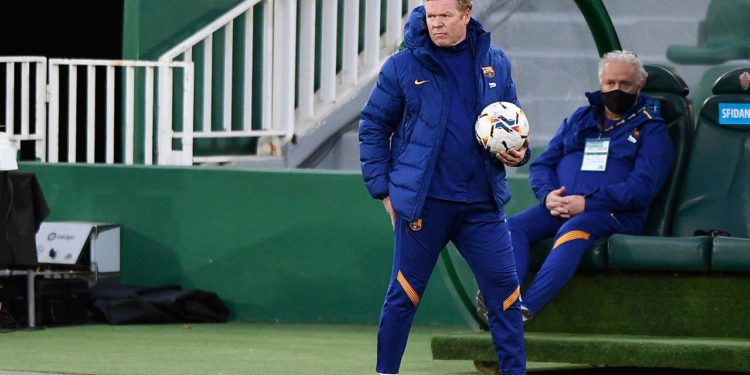 BARCELONA (SPAIN) – The Copa del Rey is a much surer route to get silverware than the La Liga title, believes Barcelona coach Ronald Koeman. He said he will roll out a strong team for Wednesday’s last-16 tie at Rayo Vallecano to make sure his side progress in the competition.
Barca stand third in the La Liga ratings and they are 10 points behind runaway leaders Atletico Madrid.
They remain the only side in the top three left in the Copa after Real Madrid were knocked out by third division Alcoyano last week and Atletico Madrid had to go home earlier this month after losing out to Cornella.
Last week, Barca overcame Cornella 2-0 after extra time and after losing the Spanish Super Cup final to Athletic Bilbao, the Copa is looking increasingly like their best shot at a trophy in a stop-start season.
They will play Paris St Germain in the last 16 of the Champions League.
“We want to fight to win every competition, but being realistic and looking at Atletico’s advantage in the league and the form they’re in, it’s going to be very difficult,” Koeman said on Tuesday.
“As long as the league is possible we’ll keep trying. The Copa del Rey is shorter, there are fewer games and we are in it to win it and that’s what I want to see my team do.”
Koeman is boosted by the return of Lionel Messi after the Argentine completed a two-game suspension but the coach did not want to say whether or not his captain would feature.
“Messi has been feeling some discomfort recently but he’s had some time off and he’s feeling fresh and fit,” he said.