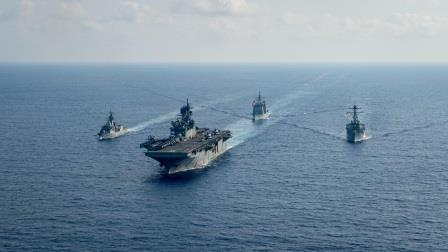 BEIJING (CHINA) – Amid growing tension with the US, China said on Tuesday it will conduct military drill in the South China Sea this week. Beijing bristled at a US aircraft carrier group’s entry into the disputed waters a few days ago.

According to a notice issued by China’s Maritime Safety Administration entry into a portion of waters in the Gulf of Tonkin to the west of the Leizhou peninsula in southwestern China has been prohibited from Jan. 27 to Jan. 30. However, no further details were furnished regarding when the drills would take place or at what scale.”

Just days after Joe Biden began his term as president, a US carrier group led by the USS Theodore Roosevelt entered the South China Sea on Saturday to promote “freedom of the seas.”

The announcement of the drills in the Gulf of Tonkin, just east of Vietnam, came as the Southeast Asian country opened a key Communist Party congress in Hanoi.