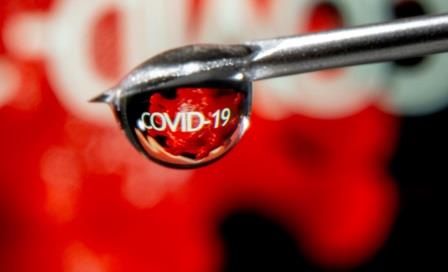 FILE PHOTO: The word "COVID-19" is reflected in a drop on a syringe needle in this illustration taken November 9, 2020. REUTERS/Dado Ruvic/Illustration

VILNIUS (LITHUANIA) –The foreign affairs minister of Latvia Edgars Rinkevics said on Tuesday that European Union member states could take legal action against AstraZeneca for flouting supply contracts if the company does not meet its vaccine delivery schedule.
The minister told, via his spokesman. “The possibility should be evaluated, and it should be coordinated among the EU countries.”
Each EU member state has a separate supply contract with the company.
AstraZeneca, which developed its shot with Oxford University, told the EU on Friday it would be able to meet agreed supply targets by the end of March.
A senior official from another EU state with knowledge of the considerations said, “Coordinated court cases would be more effective way to ensure that AstraZeneca keeps to its commitments than unilateral legal action from member states.”