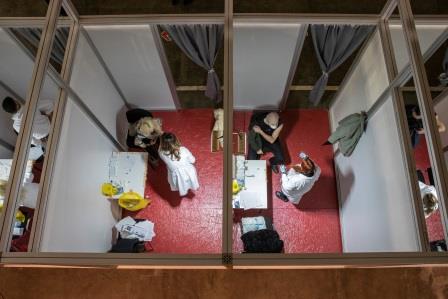 BELGRADE (Yugoslavia) – Almost 40 years after making a hit Yugoslav film about the country’s fight against a terrifying smallpox epidemic, Director Goran Markovic stood in line to receive COVID vaccination in Belgrade on Tuesday.

“I’ve been getting vaccines against flu for decades now and I think it is a very useful thing to do.”

Markovic’s 1982 tense thriller Variola Vera recounts the true story of an outbreak of smallpox in the then-Yugoslavia in 1972, the last major outbreak in Europe, which came decades after the disease was thought to have been eradicated.

Yugoslavia declared martial law, quarantines and the emergency vaccination of almost the whole population of 20 million after 175 people were infected and 35 died.

Markovic received a vaccine made by China’s Sinopharm after Serbia became the first European country to use jab in its inoculation programme.

Some in the Balkan country fear it is unreliable as full efficacy data has not been released.

“I totally don’t understand these prejudices regarding this vaccine,” said Markovic.

Serbia this week changed its vaccination programme to invitation only after seeing huge queues at vaccination centres around the country. Jabs had been open to whoever wanted them after the country first inoculated its health workers, key workers and elderly. It has vaccinated almost 280,000 people.

In the rest of the Western Balkans, inoculation has started only in Albania. Bosnia, Kosovo, Montenegro and North Macedonia have ordered but not yet received supplies of any vaccine.

Neighbouring Croatia, a European Union member, has vaccinated around 70,000 people, but only around 12,000 people have received both shots due to a delay in deliveries for the EU countries.

In Serbia, which has a population of 7 million, 3,905 people have died from COVID-19 and 385,126 fell ill with it. The country recorded new strain of coronavirus last week.