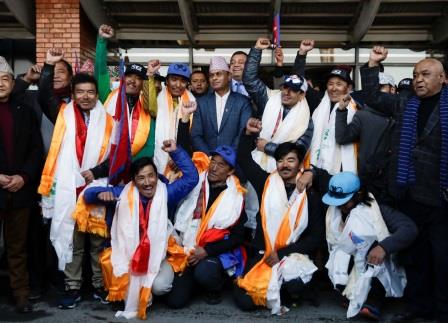 Nepali climbers who were the first to scale K2, the world's second tallest peak, in winter, cheer upon their arrival from the mountain, at Tribhuvan International Airport in Kathmandu, Nepal January 26, 2021. REUTERS/Navesh Chitrakar

KATHMANDU (NEPAL) – A team of Nepali climbers becomes the first to reaches the summit of K2 during the winter. The team of 10 men arrived back in the country to a heroes’ welcome on Tuesday.

The team climbed the 8,611 metre (28,251 foot) K2 peak, which is world’s second tallest peak,on Jan. 16, and attributed their success to team spirit and a resolve to raise their country’s pride.

The mountain, that straddles the Pakistan-China border, was first climbed in 1954 but had never been summitted in the winter.

“We succeeded in our effort because we worked as a team,” Nirmal Purja, the climbing leader, said at a public function to welcome them back. “If we unite we conquer … if we are divided we fall,” he added.

Purja, 37, who holds the record of climbing the world’s 14 highest mountains in the shortest period of six months and one week, said the K2 ascent was a huge achievement for all climbers to celebrate. “It is bigger than winning the World Cup,”he said.

Fans and families placed colourful Buddhist prayer scarves on the climbers’ shoulders on their arrival at Nepal’s only international airport in Kathmandu.

“With the success, we made our country proud even by risking our own lives,” Purja told reporters.

All except one of the group are Sherpas, an ethnic group known for their climbing skills more commonly known as support workers for foreign expeditions.