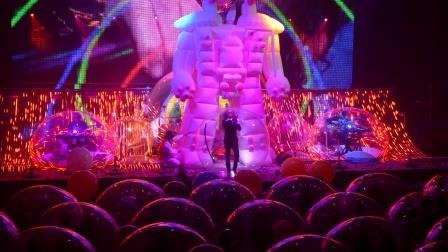 LOS ANGELES (US) – The Flaming Lips of the US have come up with a creative idea to conduct live shows despite the raging pandemic. The rock band conducted two shows over the weekend in Oklahoma, USA, by placing themselves and the audience within protective “space bubbles”.
Photographer and cameraman Nathan Poppe shared pictures on Twitter before the show of the plastic bubbles and said there were 100 in place and each one has a capacity to hold three people.
The capsules come with a speaker, fan, a bottle of water and a sign reading “I gotta go pee/It’s hot in here” to be shown to stewards, who escort fans to the rest rooms or refill the bubbles with cold air.
Those attending the show wore masks while outside the bubble, an instructional video shared by lead singer Wayne Coyne, showed.
“I think we’re quite lucky that the fans of The Flaming Lips kind of like this … adventure,” Coyne told the BBC.
“It’s not just another concert … you’re part of this thing and it’s never been done before … They’re quite up for it being different.”
The band had held a practice bubble show run last year, when the pandemic forced the cancellation of most concerts.