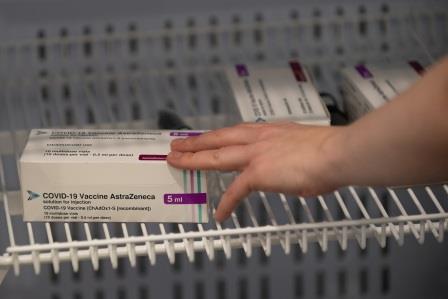 FILE PHOTO: Boxes of the Oxford/AstraZeneca COVID-19 vaccine are pictured in a refrigerator at a NHS mass coronavirus vaccination centre at Robertson House in Stevenage, Hertfordshire, Britain January 11, 2021. Joe Giddens/Pool via REUTERS

BRUSSELS (Belgium) – Amid vaccine shortage the EU has requested British drug maker to divert doses from the UK, while AstraZeneca has offered to bring forward some deliveries of its COVID-19 vaccine to the bloc, according to sources.

The Anglo-Swedish company announced on Friday that it would cut supply of vaccine to the bloc in the first quarter of this year, a move that will mean a 60% reduction to 31 million doses for the EU said an official.

After Pfizer also announced a temporary slowdown in deliveries of its vaccine, The EU’s vaccine plans were derailed, triggering an outcry in Brussels and EU capitals.

According to sources AstraZeneca on Monday had offered the EU to reschedule vaccine deliveries to Feb. 7 from an initial plan to begin on Feb 15. AstraZeneca had also revised upward its supply goals for February compared to the cuts announced last week, but the company offered no clarity on supplies for March.

This appears to be an overture by AstraZeneca to try and keep the peace with the EU as the row over its sudden cut to deliveries escalates, damaging trust between Brussels and the drugmaker before the shot has been approved in the region.

Another source said that there was no offer to increase supplies.

AstraZeneca has quarterly supply targets. Therefore an increase in February, if not followed by a rise in March, may not constitute an overall increase in the quarter.

The head of Lithuania’s drugs watchdog Gytis Andrulionis told Reuters AstraZeneca on Monday increased its planned supplies for February for Lithuania and other EU countries compared to Fridays cuts, but noted that was still not enough to comply with the EU contract.

The EU official involved in the talks also said that the EU had explicitly asked AstraZeneca whether it could divert to the 27-nation bloc doses produced in Britain, at least through March.

But the company did not answer these questions, the official said.

AstraZeneca has said the revised timetable was caused by production issues in Europe. One EU senior official told Reuters last week that the problem was at a vaccine factory in Belgium run by AstraZeneca’s partner Novasep.

On Dec. 30 Britain granted emergency approval to the shot developed by AstraZeneca and Oxford University. A decision on authorisation in the EU is expected on Friday.