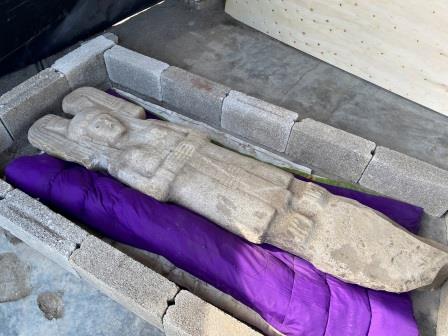 A more than 500-year-old life-size statue, discovered on January 1 by locals, that represents an elite woman, possibly a queen, from the Huastec civilization which is famed for its naturalistic sculptures of women, is pictured in Alamo Temapache, in Veracruz state, Mexico January 8, 2021. INAH - National Institute of Anthropology and History/Handout via REUTERS

MEXICO CITY (MEXICO) – When Cesar Cabrera cleared a stretch of dirt from his family farm to plant watermelon, he was in for a surprise as a mysterious block of limestone began to peak out from the dirt.

Several weeks later, Cabrera along with five other men carefully hoisted it out of the ground, and what came out was a life-size statue that had likely been buried for centuries. The accidental archaeologists had made the country’s first big find of the year.

“Look! It’s the image of a goddess!” said an overjoyed Cabrera, 52, recalling his first words after seeing her face.

The statue was moved to Cabrera’s home and further probing online over the next few days persuaded him that the statue, carved with elaborate ornaments and a flowing feather headdress, resembled the Huastec goddess of lust.

Experts suspect the statue could be 500-year-old, represents an elite woman, possibly a queen, from the Huastec culture, one of Mexico’s lesser-known ancient societies due to lack of research plus wide-scale looting over a century ago of its uniquely naturalistic art.

By the time Spanish conqueror Hernan Cortes arrived on the Veracruz coast in 1519, they had for decades been absorbed into the Aztec empire, derided as drunks and overly sexual by the more proper imperial elites but valued as a crucial link to Gulf coast riches like cacao and especially fine cotton cloth.

Portraying Huastecs as barbarians was probably a ploy to justify submission even as their artistic influence spread, according to historians.

“The Gulf coast region really had one of the most remarkable sculptural traditions,” said Kim Richter, a Huastec art expert at the Getty Research Institute in Los Angeles. She says the tradition emphasized powerful women, often tattooed and almost always nude.

Most of the statues were looted in the late 1800s and early 1900s by British naval officers and oil industry geologists around the Gulf port of Tampico, Richter adds.

Then as now, careful archeological documentation was absent.

“This amazing cultural heritage is not getting excavated and it’s not being properly conserved,” she said, noting that nearly all ongoing research in the region is so-called “salvage” work, legally required before bulldozers can clear land for development.

Over the past couple of years, steep cuts to research funding in Mexico have forced many archaeological digs across the country to close.

Sara Ladron de Guevara, dean of Veracruz University and herself an archaeologist, points to an appreciation of Huastec sculpture outside Mexico. She cited what she describes as a Venus of ancient Mexico, naked and curvy but headless, currently on display through July at the Quai Branly museum in Paris.

She said the discovery of the Huastec ‘goddess,’ found by lucky locals rather than trained archaeologists, and awaiting her fate in storage at Cabrera’s house, should send a message to Mexico’s government.

“I think this woman has come to remind us that we have a past to safeguard and heritage to investigate.”