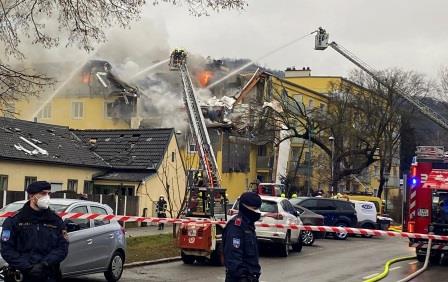 Rescue workers are seen at the site of an explosion of a house in Langenzersdorf, Austria January 29, 2021. REUTERS/Alexandra Schwarz-Goerlich

LANGENZERSDORF (AUSTRIA) – An apparent explosion has caused an apartment building in a suburb of Vienna to catch fire and partly collapsed on Friday morning. Police are yet to ascertain details about the number people who were inside.

“It appears to have been an explosion,” a police spokeswoman said, adding that it occurred around 8 a.m. (0700 GMT) but no additional information was immediately available.

Footage taken by a witness in the town of Langenzersdorf showed the top floor of the four-storey building on fire, and part of the building reduced to rubble. The witness also heard a blast around 8 a.m..