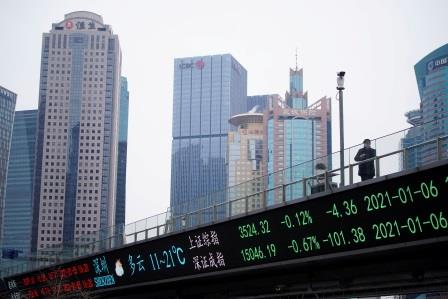 FILE PHOTO: A man stands on an overpass with an electronic board showing Shanghai and Shenzhen stock indexes, at the Lujiazui financial district in Shanghai, China January 6, 2021. REUTERS/Aly Song/File Photo

LONDON (UK) – As the Wall Street’s battle between hedge funds and retail investors and a tiff in EU over COVID vaccine supply cooled risk appetite, US stock futures and European stocks fell on Friday while the safe-haven dollar held its ground .

Wall Street has been gripped by an assault by small traders organising over online forums, such as Reddit, to force hedge funds to reverse short positions – or bets that stocks would fall – on companies such as GameStop and AMC Entertainment.

“There’s fear in terms of the volatility,” said Derek Halpenny, head of research for global markets at MUFG. “Specific trades in pockets of the market can spread into the broader market.”

Shares in GameStop, AMC Entertainment and BlackBerry plunged more than 40% on Thursday after several online platforms imposed buying halts, but rebounded as Robinhood and Interactive Brokers eased the restrictions on Friday.

GameStop shares nearly doubled and AMC Entertainment was up 55% in U.S. pre-market trade.

“Any hedge fund will be carefully looking at all their shorts after this week and regulators will look very carefully at collective retail trading,” Deutsche Bank analysts said.

Delays in COVID-19 vaccine production has turned into a row between Britain, the European Union and drugmakers over how best to direct limited supplies.

AstraZeneca offered eight million more doses of its COVID-19 vaccine to the European Union, after it unexpectedly announced cuts in supplies last week. But the bloc said that was far short of what was originally promised.

New variants of the novel coronavirus have also prolonged lockdowns and delayed expectations of an economic rebound.

Barclays analysts, however, said that “institutional positioning is not aggressive overall, and as long as vaccines work and central banks stay put, buy-the-dip mentality should continue”.

The U.S. dollar rose to its highest since mid-November against the yen, and was steady against an index of currencies, bringing its weekly rise to 0.4%. The euro edged up 0.1% and the pound was steady.

Bitcoin jumped as much as 14% to a two-week high after Tesla Inc TSLA.O chief Elon Musk tagged the cryptocurrency in his Twitter biography.

World stocks fell 0.4% towards three-week lows set in the previous session, and were heading for a weekly fall of more than 2%.

MSCI’s broadest index of Asia-Pacific shares outside Japan fell 1%, on course for a weekly loss of 4.4%. Japan’s Nikkei fell 1.9%, recording its first weekly loss of the year.

The People’s Bank of China (PBOC) injected 100 billion yuan into the financial system on Friday, following a week of reducing liquidity, which had sparked concerns the central bank was in fact tightening monetary policy.

The extra money did little to loosen short-term money markets, where rates rose for a fifth straight day and benchmark overnight repo rates surged to their highest in nearly six years.